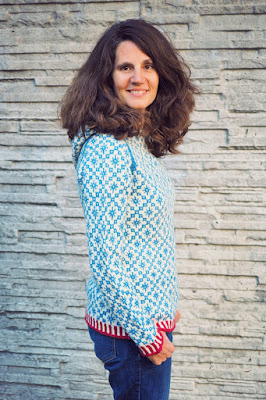 This was one of the patterns that had me head over heels at first sight. Right away I knew I had to make this. The combination of the beautiful all over pattern with the contrasting details at the hem, cuff and hood are just perfect. I even decided to use the original wool, which I knew was going to be much more sheepy than what I usually like to wear. I was a bit scared that it might turn out to be super scratchy but right from the start it felt ok. Slightly rough and a bit smelly but not too much so and not itchy at all. After the blocking the fabric is even less stiff and I am sure it will soften more with use.

Knitting this was a real challenge. I had to learn new techniques (now I know how to do a provisional cast on, I had to cut a crochet reinforced steek and there were a few other details). But the really difficult part was to get the size right, even though I did the most elaborate swatch with steek ever. 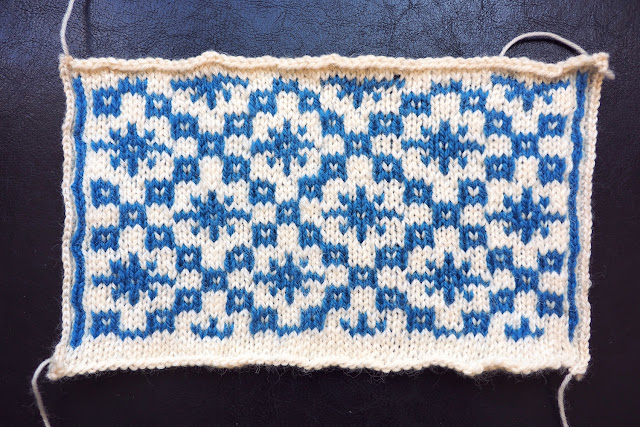 I don't think it was only my fault that it didn't work out, I read a lot of posts by people who found it as difficult to get the size right. I started with size 3 which is bigger than what I would normally knit / wear. I had finished all of body when I realised that it was too tight, so back I frogged. The second time I had done about 5 inches when I noticed that I had twisted the cast on, no idea why it took me so long to see it, but there was nothing to be done, I had to go back again. The third time - following size 4 - seemed ok and I was ready to start the sleeves. 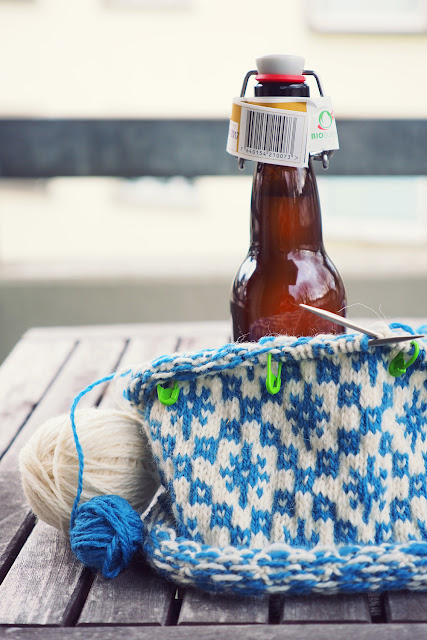 At first it seemed to work out but I only got to the last increases right before the end of the sleeves and again, it was just too tight. I changed the increase rate on my second try and it seemed to fit better. Most of the sleeves was actually knit while we were in California, it must have looked super weird when I was knitting something so obviously warm while wearing a bikini.

I think that it's always extra cool when something I am wearing has been made far away, I am sure there is still a bit of ocean air and sand trapped in there somewhere. 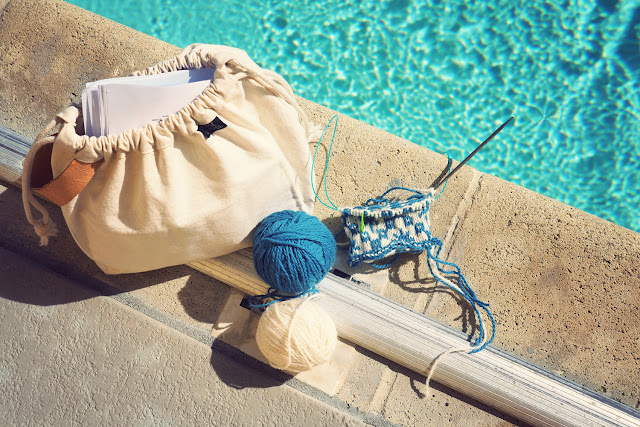 Back home I was finally able to join everthing together. It was as wobbly as I expected, this is really my least favourite part of bottom up knitting. I had to adapt the pattern again for the increases, but at least I got it right on the first try. And would you believe that it was still really close to being too tight. 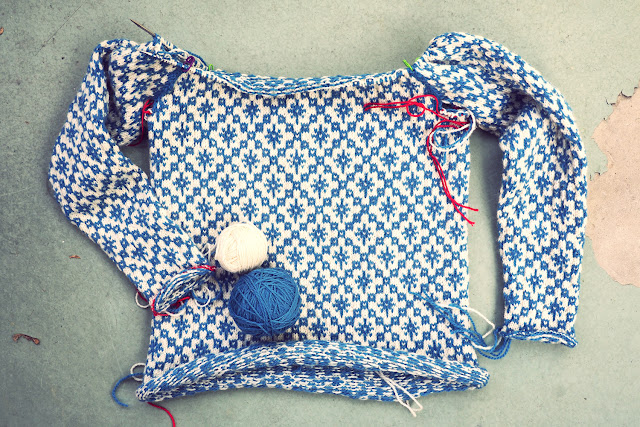 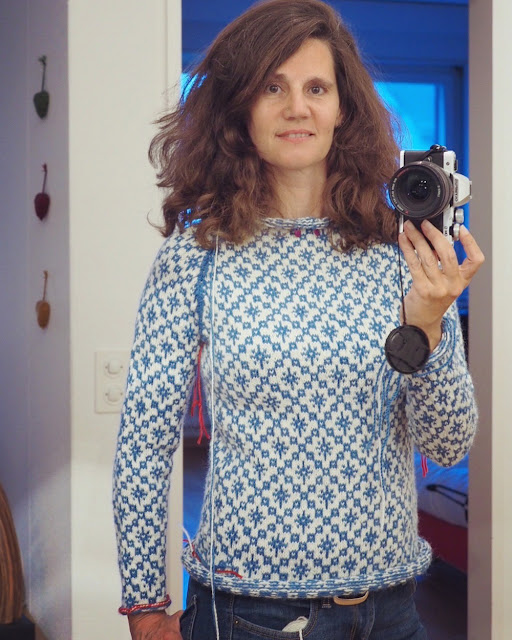 I knit the hood and added the trimming and then -  I ran out of yarn. Fortunately it didn't take that long for more of it to arrive from Scotland and I could finally finish the last remaining parts, the cuffs and the hem. I was quite fed up with the whole thing by then because it definitely looked like the biggest waste of time: it looked more like a sausage than anything comfortable and wearable. But I knew that I had to try to block it as hard as possible, because the fabric of the swatch felt really different from the unblocked sweater. I gave it a long bath and then I stretched as wide as possible, especially at the sleeves. 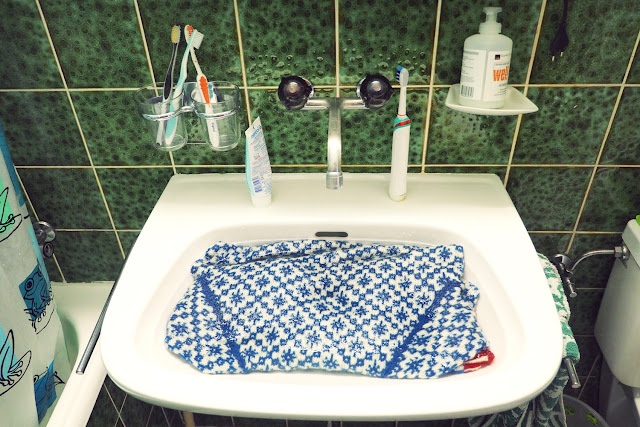 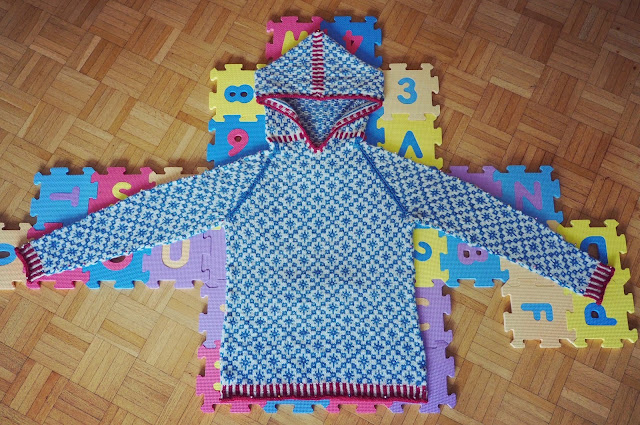 And now it's off the mat and it fits ok. In a perfect world the sleeves would be wider but I think it will be ok and I definitely can't be bothered to frog anything back. This is it and I gave my best ;-) After this I really need a few nice and easy projects... 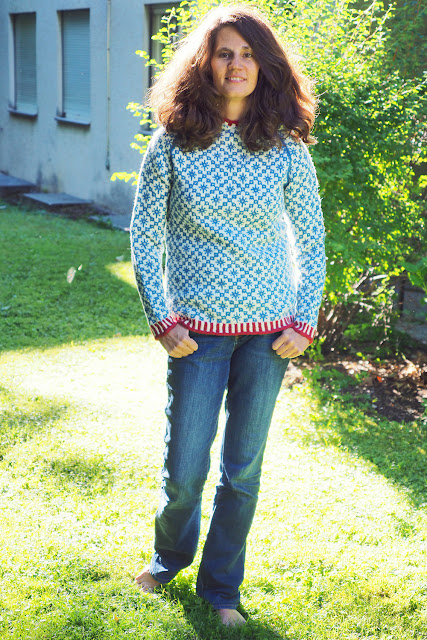 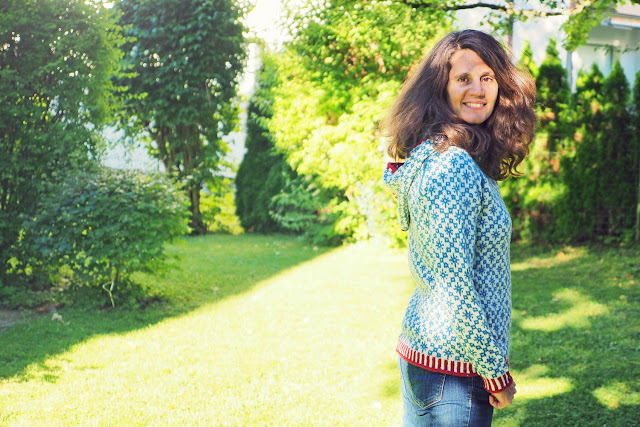 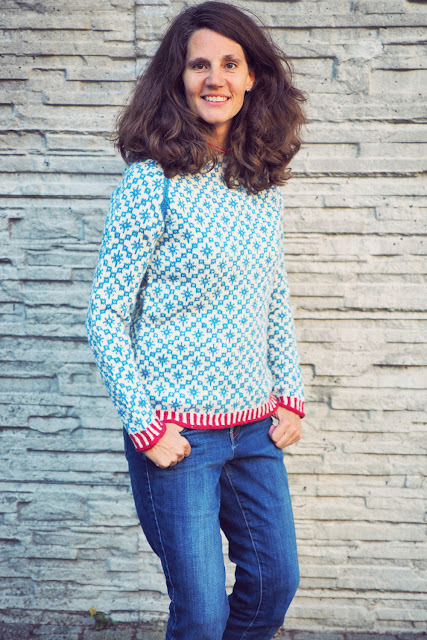